With summer garden season in full swing there has been an increase in zucchini recipes on pinterest. Anything you’ve ever dreamed of doing with a zucchini and dozens of things I’m sure you haven’t. I recently saw some pins that turned the zucchini into noodles and used it in place of pasta noodles. I LOVE spaghetti squash and to me the idea of another squashy noodle option was too good to pass up. However, I had a pinterest fail, didn’t repin, and later couldn’t find the pin I was looking for.

This week found me with a pile of zucchini goodness and no pasta recipe, so we improvised. Midkid is always asking for Alfredo sauce. He doesn’t really care what’s with it so long as it’s covered in Alfredo. Butter, cream, cheese; can ya blame him for his love of all things Alfredo? When we say Alfredo sauce this does not include anything that comes from the supermarket in a jar. I have tried them all over the years and have decided that there is just no such thing as good jarred Alfredo sauce. I decided that if I was using veggie noodles I could be a little bad and use a cream sauce. 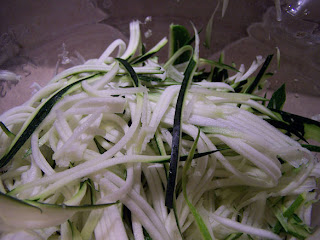 We shredded the zucchini. I have this super cool peeler that makes julienne slices while you peel. Makes things so much faster! We had 5 medium zucchini and peeled them to the seeds. My kids don’t mind green on their plates, so I didn’t peel them first, but you may want to. I put the shreds into a pot with some water to steam them a bit while I made the sauce.

Homemade cream sauces are incredibly easy. When I first started dating man I married the first meal I made for him was Fettuccine Alfredo with Shrimp. That Alfredo in no way resembles the sauce I make now, but I followed the directions and served it up and he never realized that I had no clue what I was doing. Unfortunately, I then had to prepare more meals and had to quickly learn as I went. But those evenings spent in the kitchen together are some of my favorite memories and years later I would sometimes postpone my meal prep just to have him in the kitchen with me sharing the events of our day.

But I digress. Cream sauces all start pretty much the same way. Chunk of butter melting in your pan. 3 TBS is probably a good guess, but I tend to just throw in a bit and go with it. Once my butter is melted I add some minced garlic. We love garlic, so a clove or two and then another for good measure. Once lightly browned you make a roux by adding flour. I’m sure there is some butter to flour ratio, but I just scoop some in and whisk it together. Start small and add a little more you want it to be a thick paste. 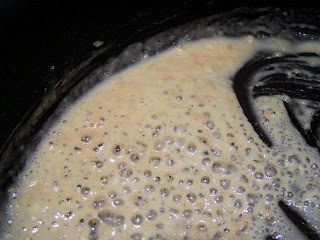 I took the picture before turning my heat down. I really hate having an electric stove. Add your cream or half n half, or in our case whole milk. You need something with a higher fat content, but I use whatever happens t be on hand, about 3 cups worth and whisk it in. I like to add a little rosemary and thyme. While it’s warming together I add a splash of white cooking wine, but if I’m out we pass. The sauce should be thickening. Then we add about a cup of shredded Parmesan cheese and we even added a half cup or so of colby jack. Once the cheese is melted in we added the zucchini and mixed it up. I didn’t think to squeeze the fluid out after steaming and I should have. It thinned my sauce up more than I cared for.
I add tomatoes from the garden and some cheese to make it pretty; we like color. The turkey is not a tomato fan, so I thought I was avoiding a battle by just leaving them off of his, but of course he realized he didn’t have any and when eldest child called them watermelon he demanded some on his plate and actually ate more tomatoes than zucchini. I’m sure I’ll never get him figured out. I’m sure it would have been good with chicken were there any thawed out, but I’m okay with a just veggie meal from time to time.
This entry was posted in Cookin it up Friday, recipe and tagged alfredo, recipe, zucchini. Bookmark the permalink.