Work in Progress not Wednesday

I had intended to post yesterday, but it’s been a crazy week. Really no more chaotic than usual, but it felt like the chaos was a steady stream rather than small bursts.

The bean is now a walker! It’s been very exciting, but of course adds a new level of crazy to the mix. It’s also an end to babyhood in our house which I find a bit sad.

I talked to my mother this week. We have a very strained relationship and this was our first chat in nearly a year. It wasn’t quite bad, but I’m not rushing to make this a regular thing either.

As the school year heads into the final stretch the boys have various activities we end up shuttling between and then I have the regular, cooking, cleaning, and running of my business.

This morning was filled with excitement as I woke up at 2am and found something flying around my room. I originally thought it was a moth and that the quiet, dark, and my hardly conscience state made the whooshing sound louder than it was, then it came careening towards my head. A BAT! Yes, a bat, had somehow infiltrated my home and was whirring around my room. I pulled the blanket over my head and crawled out of the room with the baby hidden under my protective quilt. After settling the baby in the living room I decided that surely the many episodes of Billy the Exterminator had made me qualified to rid myself of my new house guest. I donned my blanket again, feeling a bit like Harry Potter under a cloak of invisibility. I debated getting a bat or other object, but since my plan was meerly to slink in and open a window, so he could find his way out I wagered I didn’t need it. I couldn’t see or hear him. He must have settled somewhere, I pulled back the curtain and out he springs. Ack! I screamed like a little girl and dropped to the ground he was a slight ways away from me on the ground and I should have pulled it together enough to throw a box over him or something instead I sat with the blanket tented around me praying it would fly the other way so I could sneak through the adjoining closet and out via the boys’ room, which I did. Checked on the bean who was happily playing with a puzzle; apparently this is fun time for the 1 year old. Cracked open the bedroom door to spy on the bat who had hung himself from the shelf and seemed to be getting cozy. I had already talked myself out of calling my uncle to come rescue me and decided that it might be time to declare a temporary draw while the troops (meaning I) get some rest and regroup. I cautiously reached through and pulled the pack n play out of my room, so the bean could go back to sleep and shut the little flying bugger in. Come morning he had found a new place to hide and it rook some hunting to capture him. This I left to my uncle as he has animal experience. And apparently the light of day makes me less brave. I am willing to co-exist with creatures of the night, but I refuse to be roommates, unless he’s willing to cover his share or the rent, well maybe… I will cautiously be sleeping in my own bed tonight. And instead of working on my many projects I will be taking a nap this afternoon.

You may be wondering what I’m working on.

3 baby blankets that are cut and need sewing.

This cardi that just needs the edging finished (okay, yes, it’s for me):

This head that will become a super cute waldorf doll(not for me): 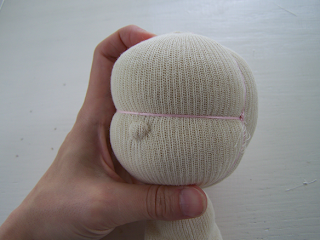 I also have a couple shirt designs to finish tweaking, and several more important blogs to write. One on the importance of handmade and a couple tutorials involving quinoa and pail liners, though not at the same time. The days are hardly long enough.

This entry was posted in WIP Wednesday. Bookmark the permalink.

2 Responses to Work in Progress not Wednesday